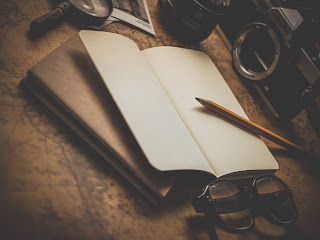 Three years have passed since I started this topic. The first two posts in this series were posted in January and March 2018, and while I wrote two other posts for this series they never got uploaded. I'm returning to this series specifically because I think it's an important topic. Not just for me but for many people that write. I think there is great benefit about thinking about why one writes. While I may end up posting the two posts that were written in 2018, I've changed enough over the years that I decided to start with Part 3 from where I'm at now. It's fitting since that post is less a "Why I Write" and more about the "where" parts of writing. I'm hoping to wrap up this series in 2021 with this new Part 3 and four more posts that I've already outlined. To keep some momentum going, the next couple blogs will be On Writing pieces. You've been warned. Here is Part 3.

Where. I know the subtitle of this series is “Why I Write”, but I’m going to spend some time on the “where” of my writing. This post is not going to be as straightforward as some of the other topics, because “where” can mean a lot of things. Where is my body when I write? Where is my mind coming from when I write? Where am I trying to go with my writing? This might be the hardest post to write to accurately convey my thoughts on this but I’ll try my best.

The physical where is the easiest part to write about. The most honest answer to this is anywhere or everywhere. I’m not sure I can list all of the places I’ve written. Home, work, school, the coffee shop, airplanes, automobiles, parking lots; those are all places almost anyone has written. Movie theaters, church, conventions, vacations, baseball games, restaurants; these are some of the more random places. I’m not talking about writing scoring data at a baseball game or sermon notes at church; I’m talking about writing down story ideas, blog posts, newsletter topics, speech ideas, or similar topics that don’t directly involve the place I’m writing. I’ve written part of a fiction timeline during a particularly long sermon, hundreds of poems in a combat zone, entire blog posts during a three-hour lecture at college, and the structure of Camp Karas releases between weekend grocery shopping stops. I’ve learned to always keep some type of writing instrument and paper source on my person at all times because I never know when some type of idea or inspiration will hit me.

There are frustrations that occur because sometimes I can’t stop to write stuff down. When I was taking classes at Arizona State University my morning commute was often 45 minutes, and I couldn’t break out the pen and paper on the highway to write stuff down. I’ve shied away from using a voice recorder for a couple of reasons. First, I hate the sound of my own voice, so listening back through a recording would likely drive me insane. Second, I’ve never been good at transcribing from an audio recording; I’m not sure if it’s how my brain is wired but it takes me ages to get one lecture transcribed. I did attempt to use a few speech-to-text apps but none of them were good enough for me to invest time and money in. They were so inaccurate I had to do a lot of editing to correct everything. I do try to take one-word notes if I’m driving to jog my memory, but even that has a poor success rate.

The mental and emotional “where” is probably the most difficult to talk about concisely. It’s not always easy to write on a specific topic. Writer’s block is a real thing that I believe is heavily impacted by the mental state of the author. The writer’s mental state can also push that person into writing more, and that doesn’t just mean being in a good mental state. Many great authors wrote from a place of deep mental despair or even mental illness. I know I’ve been extremely prolific when I was in both good and poor mental states, though I’m not sure the quality of what I was writing was the same. The topics were definitely not the same. For work I need to be in a focused state mentally. I need to block out distractions, switch from music with lyrics to instrumental music, and generally avoid interruptions. That doesn’t happen much at work, I’m often interrupted. As an example, I’m nearly seven hours into this post as I write this sentence. I’ve lost track of the number of times I’ve been interrupted. And I’ve gone from being relatively calm mentally to a place where I’m likely to get snappy with someone if they interrupt me again. However, when I’m writing for work, there is often a defined finish line in sight. So, I’m never in fear of not finishing the specific post, newsletter, or product description. Writing for work is far easier for me due to the overall structure of what is needed from my writing.

This past year has been a drag on my personal writing. I’ve written next to nothing all year long, and I attribute that almost entirely from being in a weird place mentally. Not necessarily in poor mental health, but simply the stress of uncertainty and worry about my family has drained away most of my creativity. I’m sure many people have felt the same sapping of their proverbial creative energy. I didn’t expect it to be as bad as it turned out because I’ve been able to write when I’ve been in some pretty dark places. I’m hopeful I can turn things around and start to write again for myself. I have so many ideas floating around in my brain, I need to get them out on paper.

Where is the writing leading me? Where is the journey of writing taking me? Or some form of this question is how we’ll wrap up this post. For me these types of questions don’t have answers. Or maybe the answers are so fluid I can’t grasp them until I’m near the end of what I’m writing. To be fair, I’m speaking of my personal writing. Whether it’s poetry, prose, memoir, short or long fiction, etc. there isn’t a defined answer for where my journey is going. Honestly, writing has always been therapeutic for me. There is a desire for healing in the journey of my writing; a hope of relief and revitalization. I know that’s not necessarily attainable just through writing, and I know that journey of healing might not have an actual destination. But it’s the answer that I’ve landed on most often when I’ve pondered this question.

I’ve written in times of joy and times of heartbreak. Covering topics from Sunday evening dinner to suicide. I’ve struggled to write two paragraphs advertising new products, but been able to effortlessly put down hundreds of words about the horrors of combat. I have lost count of the number of short story ideas floating around in my less-than-perfect brain, but on the other hand there are some days I struggle to get a decent product description, newsletter entry, or blog post completed in eight hours. As much as I love writing, I have yet to find a formula that cracks the code on quality and quantity when it comes to all of my writing. Sometimes I’m better at writing for myself than I am at writing for work, and other times my work content is lightyears ahead of my personal writing. There isn’t a rhyme or reason, it’s just the way it is.

It often feels like I’ve spent decades honing my skills at writing, and I’ve only accomplished baby steps of improvement. I can get discouraged if I let myself think about it in the wrong context. Deep down, I know I’ve improved massively over the years. Most of my improvement came when I started thinking about writing, when I started analyzing things like I have in this post. When I put some mental energy in the “why and where and how”, I began to care more about the entire process of writing. When I began analyzing other writers works and looking at form, structure, plot, background, and that writers “why, what, where, etc”; I got a lot better at the craft of writing. It became easier for me to put words together that worked. I cared more about what I said and how I said it. I hope I also became less opinionated and more open to growth. I know that even in writing these posts for the Karas blog, I’ve learned a lot about myself and my writing. Hopefully, you’ve been able to learn something about your own writing journey.

Until next time, keep writing.

Posted by KarasKustoms at 3:23 PM