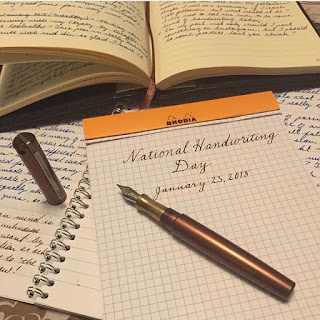 I’ve most likely covered this at times in other blogs. I might have even written something with the same title, though likely not on this scale or with the level of introspection I’m going to put into these posts. The reason I often come back to this topic is that it is often on my mind. As a writer, I frequently receive comments, read articles, or simply have a thought that prompts me to think about this topic. The answer isn’t always exactly the same, while the origin story of my writing is the same, the reasons or the circumstances for that period of time might lead me to respond differently. This series on “Why I Write” will take the reader from my origin story through a myriad of "reasons" I write to a list of items I prefer to use when I write. Some of those reasons will be recurring and others will be reasons I’ve landed on in the moment or recent history, and a few might have been impactful for a specific time in my life. Mostly I want to connect with the reader in a way that prompts them to consider why they write or perhaps help them experience writing differently.

Origins of a Writer

I write because I can’t draw. That statement is anathema to a lot of people. It comes across as relatively strong and sure and somewhat dismissive. You’re reading it but let me be clear I’m saying it in a way that should convey total confidence in you that I mean what I say. I didn’t grow up dreaming about being a writer. I loved to read, but I only fell on writing because I failed time and again at drawing. I grew up dreaming about being a comic book artist.

From the time I could mow a lawn, wash a car, and have a paper route; I read comic books. My mom bought my brother and me comics earlier which started my addiction to them. But she couldn’t afford it very often, so it was more of a luxury. When I was ten or eleven, I began doing small extra chores for money. Mowing our massive front and back yard for five dollars, washing the car for three dollars, I got a paper route that paid something like forty-five dollars a month. There were a lot of things I bought: baseball and basketball cards, G.I. Joes, gum and candy, but comic books were at the top of the list.

I grew up in what I still consider to be the comic book revival. Comics fell off in the 80’s some in quality outside of books like Dark Knight and Watchmen there was a lot of garbage coming from the DC and Marvel. That combined with how poorly artists were paid for their work caused a major move in the comic book industry right at the time I was able to start buying comics with my own money. In the 90’s well-known artists left DC and Marvel and started their own studios. Image comics was the collective these studios worked under, and I fell in love with nearly every release Image put out in their early days.

Artists like Jim Lee, Todd McFarlane, Marc Silvestri, and Whilce Portracio left major publications, to create new heroes and villains with new artwork and coloring. Spawn, WildC.A.T.s, Cyberforce, and Wetworks along with numerous other titles were born. Unbeknownst to me, they brought with them one of the best comic book writers of all time, Chris Claremont. I didn’t care about that, all I cared about was the art.

With a great burning desire I invested every leftover cent I had in sketchbooks, mechanical pencils, woodcase pencils, even colored pencils all in a vain attempt to create my own comic book. I checked out every book on drawing the library had (this was pre-internet so the library was a big part of my childhood) and began trying to teach myself how to draw. I went through hundreds of pages of dogs, cars, dinosaurs, sharks, and other random sketchable objects. Weeks turned into months and I flipped through sketchbooks, my heart sank as I turned each page. There was no improvement. I could sketch rough animals, was slightly better at buildings and cars, but when it came to people I was horrendous. There was no other way to put it, I couldn’t draw a person to save my life. If I couldn’t draw people, there was no way I could create my own comic book.

In a fit of anger and sadness, I carried all of the sketchbooks to the trash and tossed them in. Took the leftovers and gave them to my brother. Returned the books on drawing and on a whim checked out Fellowship of the Ring. I barricaded myself in my room and came out when I was done with the series. A new light in my eyes. I went from a fantasy world of comic books to a fantasy world of words. Characters leaped off the page, the thousands of hours of reading comics and attempting to draw had only honed my already well-developed imagination; and they enabled me to see every person, place, and thing in Middle Earth as if I was standing right there.

My brother had taken up the pencils and expanded to paints and other mediums. Where I failed at art, he flourished. Inside I was jealous and a bit angry, but he was my best friend and after a while I simply let it go. Art slowly faded as I finished more and more books, before long I was writing, albeit poorly. Derivative stories of superheroes or fantasy wizards and warriors. My brother and I began talking about collaborating on our own comic book. I’d write it and he’d illustrate it. We never did anything beyond a few panels; it is something I still wish we’d accomplished.

My writing overflowed in nearly every aspect of my life. I had always loved essays and reports, not I craved them. I read voraciously throughout junior high and high school and wrote pages upon pages. Everything from fantasy to reports on small battles in World War II, to poetry, and even a few terrible rap lyrics. I wrote everything by hand until my junior year of high school when I bought an electric typewriter. I’d write by hand when I was out, then take over on the typewriter when I got home. I’d use a three-hole punch and put the typed pages in a binder with the handwritten pages.

Looking back on my origin story, I’m no longer sad and angry about not being able to draw. I found a different medium of creation and expression. Writing is a part of me, it’s integral to who I am and who I’ve become. It’s grown and changed with me as time has gone on. I went from thinking of it mostly as a tool that helped me through school and then, later on, to secure work and now I consider it something of a trusted companion.

Writing is something that transcends the simple task of putting pen to paper. It’s more than arranging letters into words and words into sentences. For me it’s become a way to put myself into the very stories and poems I write. I leave part of myself in every piece. It’s not a conscious decision I make, it just ends up that way. What I write is important to me and so I take pride in it, but I also understand that what I write MIGHT be important to others. I just hope that others who read my pieces take away something from it, and maybe they get to know me a little bit in the process too.
Posted by KarasKustoms at 1:25 PM