It's Been a While, But Hopefully Some of You Are Still Here...

It seems that every year we’re hoping to be more active on the Karas Pen Co Blog with unique content, and every year we get behind that eight-ball rather quickly. This year we’re already 5 months behind and haven’t posted anything. In fact, it’s been nearly a year since our last post. I’m not going to promise to keep this more up-to-date, that just seems like a broken promise. But I’m hopeful I can at least post once a quarter on here. Not just repost or copy and paste from our newsletter or social media posts, but content that is crafted for the Blog and its readership. Wish me luck. That being said, let’s get started with some news for 2019.

Due to some changes in our facilities, we’ve been unable to post a lot of video content like we did last year. Using our old area is out of the question as the external noise has increased and we don’t have a way of temporarily decreasing it. We have decided to build a dedicated video room this year so that in the future we have a permanent home for our video recording and potentially some audio in the form of a podcast. For now, we hope you’ll remain subscribed to our YouTube channel and bear with us as we have limited new content for a short period of time.

You may have noticed an uptick in stickers, patches, buttons, and images over the last 3-4 months. We’ve hired a full-time graphic designer, and she’s given us a major boost in terms of visual content. We’ve always wanted to crank out more stickers and buttons, but it is hard some times when there’s so many other things that need your attention. Thankfully her addition is paying big dividends in terms of graphics but also as she works through a complete website overhaul and upgrade.

Speaking of stickers and buttons, hopefully the quality of the stickers and buttons has increased. We recently switched to a new manufacturer for all of our sticker and button needs. In the past we’d been unhappy with the quality and timeliness of the companies we’ve used for our promotional sticker needs. We now get all of our custom printed Stationery Stickers from our friends at Sticker Mule and immediately saw a massive increase in terms of quality and our lead times were drastically reduced. We’ve also been able to source sticker sheets at extremely competitive prices. We’re always happy to collaborate with another US manufacturer, and this is one of those situations where we’ve found a company that truly exceeds our expectations. If you’re in need of some dope stickers or badges, we hope you give them a shot.

We’ve got several upcoming releases that we’re pumped to get out of our facility and into your hands. They range from new styles to custom colorways to new products. We’re not sitting on our laurels this year, we’re pushing ahead. Let’s spend the rest of our time together digging in to some specifics so you’ll have a better idea of where we’re headed and when you’ll see certain products.

Much of the First Quarter 2019 has been taken up with setting up and proving out a new machine upgrade. We purchased a Swiss lathe late last year, and it’s now up and running. This investment of both time and money is pretty big for us, especially after we spent the last two years purchasing three other CNC machining centers for our pen production. But the Swiss lathe will increase our finished quality while drastically reducing machining time. It is a major financial investment and does require us to purchase more expensive raw material, but we feel the overall increase in quality is well worth the investment. We’ve used it on the EDK production run that was just completed and the Retrakt production run that is wrapping up now.

With our latest EDK production run we’ve added a new lower barrel option in limited numbers. Much like last year we added the GroovED lower barrel and released about 600 pens in special colorways with that barrel design, this year we’ve added a fluted lower barrel. We’ve already released one colorway release, and have several more planned for 2019. We have about 700 aluminum fluted EDKs and about 200 brass fluted and 200 copper fluted EDKs. If you’re interested in these releases, you’ll want to follow us on social media or subscribe to our newsletter.

Last year we did some themed releases around automobiles with the Retrakt R-Type and BMX culture with the BMX inspired Bolt V2 series. We’ll add more pens to both of those themes this year, but we’ll be adding another theme this year: Camp Karas. We love the outdoors and we’re blessed with the ability to spend time in nature 365 days a year. We’re also lucky enough to live in a state with a huge variety of flora and fauna. Everything from javalina and cacti to evergreens and elks, Arizona has massive amount of natures splendor ready and waiting for the hiker, biker, or wilderness adventurer. Our Camp Karas summer/fall series of pens will draw inspiration from that aspect. We’ll be curating specific colorway pens, creating some amazing art around wilderness adventures and explorers’ clubs, and releasing some unique pens and accessories all based on the idea of getting out of the house and spending time in the Arizona wilderness. 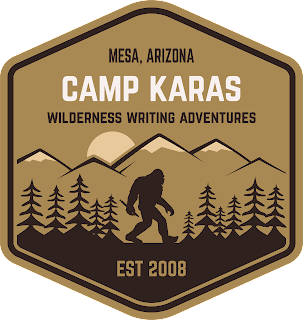 This year is the 50th anniversary of the Apollo 11 mission to the moon and the successful moon landing. We’re closing in on a special release that will commemorate the Apollo 11 moon landing with a few items. It’s going to a really cool release that will feature some current products in new finishes/materials and if everything falls into place a new product to go along with it. Our fingers are crossed and we’ll be posting updates next month.

The Karas Pen Club goes into it’s third year of existence with a brand-new coin and all new artwork. We’re lucky enough to have a current club member create some killer artwork that is being used for both the front and back of the coin (you can see images of that below). The artwork has already been sent out to Shire Post Mint and the stamp has been created. We’ll be ordering a whole batch of coins in antiqued brass this month. Those coins will go live on our website in July. The Karas Pen Club gives members access to production design images, prototype sketches and videos, exclusive Club Only products, early access to many of our special releases and limited editions, and Club pricing on qualifying items. It’s also a chance to cross talk online with Karas Pen Co employees via the Karas Pen Club closed Facebook group. 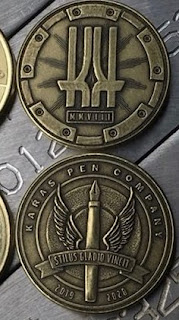 Lastly, a Vertex update. Initially slated for an October 2018 release, the Vertex fountain pen has since been pushed back several times since then. The main reason behind this delay has been due to our two CNC lathes being down at various times (once for several months) due to major mechanical and electrical failures. In December 2018 we purchased a small single spindle CNC machining center with the hopes of moving all future Vertex manufacturing to that machine. That machine has had three major component breakages since we powered it on in mid-February. We desperately need to complete the initial production run and release it to the public so we can recoup some of our initial investment. We understand many of you are really looking forward to getting a Vertex, and we want that to be a reality. We’re no longer listing a hard date in terms of a release until we have more of the machining processes complete. The caps and barrels have been machined, and we are currently working on completing the grip sections. The box has been designed and prototyped, we will begin manufacturing on the box this month and as it relies on our CNC mills it will not interrupt pen production. We’re outsourcing the manufacturing of the box lids to a stamping house who has already started that project and should ship our completed lids in 3 weeks. We’re also looking at ways to increase production on certain Vertex pens so we will be able to make them a standard offering in the future. More information on that will be forthcoming after we officially launch the Vertex. I’m hopeful everything comes together soon, and we’re shipping Vertex pens by mid-summer.
If you have questions or concerns, contact us through any of our social media accounts or the contact form on our website. If you don’t already subscribe to our numerous methods of more instant and less wordy communication, you should probably do that.

As always, thanks for your patience and your patronage, we couldn’t do what we do without you!