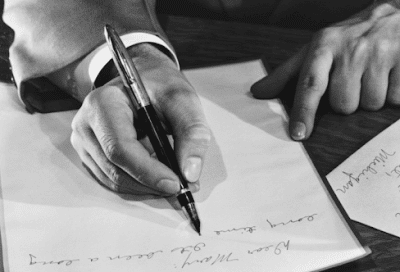 Now that we have the long and relatively boring origin story out of the way we can focus on more important things. The ideas that drive me to write. My “writer’s ethos” for lack of a better term. I’ve been told my motivation to write is both sentimental and romantic. That it lacks a lot of mechanical reasoning. I’m perfectly okay with that. I don’t ascribe to the idea that writing has to have a designed purpose. I’m comfortable with the thought of writing for writing's sake. I’m also 100% behind writing for no other reason than to see ink flow on paper or to test the viability of lining up words together just for the pleasure of seeing them sit side-by-side. Writing does not require an end game, many times an end game would completely ruin what needs to be written; and I’m okay with that too.

I’m going to attempt to have a theme for the rest of these posts. This will be difficult for me because I like to jump around and being constrained by one set of thoughts and ideas is often problematic when I’m writing something mostly from “scratch”. That said I’ll do my best to “color within the lines” as I’ve defined them for each post. The themes will take the form of whatever “reason” to write I’ve identified as being important. All of this is a loose set of rules I’m setting for myself and for you the reader. Since importance is really a poor word for what I’m trying to relate, which shows how long I have yet to go where writing is concerned; a better writer wouldn’t require this disclaimer.

For Part 2 I think we should start with a tangible “reason” to write. This is also likely the most applicable to my job at Karas Pen Co since the tangible “reason” to write I’ll be covering will be the writing instrument itself. I don’t plan to land on many specific writing instruments since that’s largely subjective, but I will tie this all into how writing instruments can prompt the act of writing, or foster it, or draw one to desire to write more. The focus will be on the implement itself, and I’ll delve into the emotional/psychological state I sometimes enter with specific pens and pencils, but only as it applies to the writing instrument itself. So much for the boring part of this post, let’s hope the rest of this is more enjoyable to read…and to write.

In the past, I never paid much attention to WHAT I was writing with. For the majority of my writing life, I just used whatever was handy or sometimes what felt comfortable (that really only applies to pencils in my case). When I was in high school and college I made the choice to ONLY write with pencils. My handwriting was far too sloppy for pen use, plus I often needed to erase entire lines of text and start over. Needless to say, pencils were a must. Then I joined the Army, pencils were rarely used. A pen that used black ink was the only acceptable utensil for writing. I used a Fisher Space Pen, the standard black slip cap one, for a long time. It served me for my entire first deployment and most of my second. But even that pen was really only a tool, it never impacted the writing experience in a direct way. I rarely used it for anything other than official documents, my letters were written in pencil.

By the end of my career in the Army, I was doing most of my personal writing on a laptop. Journaling, poetry, and stories were all recorded in a stripped-down word processor that took up little space and was designed to hold LOTS of content. I separated from the Army, failed to back up all my files, and subsequently lost hundreds of documents both professional and personal. After that fiasco, I went through a period where my writing was entirely blogging and wasn’t very imaginative or very good. Then five or six years ago, I got into fountain pens.

My wife convinced me that a fountain pen could help improve my handwriting. I immediately went online and started looking at pictures of fountain pens, rather than finding reviews of fountain pens, something completely out of character for me. Needless to say, I ordered a 1940’s Sheaffer in that lovely green and black striated material off eBay. I had no idea the pen needed to be repaired until it showed up at my house, and in the space of a week, I was off on a trip teaching myself fountain pen repair. This was the beginning of my education in how a writing instrument can dramatically change every aspect of writing.

There is something almost speechless about picking up a truly remarkable pen or pencil. Again, I’m not speaking to specific brands or styles, simply that a person can be a pen or pencil user for years and then one day they are handed a pen or pencil they’ve never used and it falls into their hand, the heavens open, and the Hallelujah chorus starts playing. This concept is one that I first found when I repaired a rather unremarkable looking Sheaffer Triumph Touchdown. The pen had been a beater and seen a lot of heavy use. It took all my skills at the time to repair it and something over 2 hours just trying to seat the rear plunger seal. But when I was done and the pen was inked up, I set it to paper and started writing and the experience was utterly amazing. It was unlike any other writing experience I’d had up to that time. I wrote a page of largely nonsensical statements and set the pen down. Immediately it was back in my hand, and I think I filled another five pages of random writing before I forced myself to stop writing. I’d experienced a pen that MADE me want to keep writing even when I had nothing else to say.

I’ve since run across this numerous times, with pens ranging from two dollar ballpoints to fountain pens costing hundreds of dollars. It’s always a unique almost unsettling experience, especially when the pen is owned by someone else and you have to give it back. But the experience is one, I truly feel everyone should have. It encourages writing in a way that other forms of encouragement simply can’t. It creates a desire to write that is external but serves to push in a way that isn’t nagging or driven by another human. It is also an external driver to write that can be fully controlled by the writer, so you never feel out of control during the process.

The correct writing instrument is also important because so much that we do today is digital. We discount analog instruments as being old fashioned or not user friendly. But the reality is - writing, not simply putting your brain on paper, but the analog process of writing engages the brain in ways that other forms of communication can’t. There are numerous studies listing the benefits of analog writing. Psychologists prescribe it as stress relief and for those that are experiencing anxiety from being in a constantly connected digital world. And the benefits only BEGIN at those points. I’ve come to understand one way to get over hurdles that are often present to new writers is finding that writer the correct pen or pencil. The right instrument that is comfortable, feels like a part of them, encourages them to write, isn’t too difficult to use, and speaks to who they are; all of these are elements that can turn writing from a chore into a daily experience.

For these reasons I highly suggest going out and picking up as many random pens and pencils as possible. Visit pen stores (yes they exist). See if there is a pen meet up in your area. Attend a pen show. All of these situations will bring you in contact with far more writing instruments than you could ever imagine existed. I would wager a new pen that if given a decent amount of writing instruments, you’ll find one that creates that “moment” for you, and I guarantee it will be a life-changing experience.

Too many people are rushing around, spending their time texting frantically, Snapping, or Tweeting and they are missing a truly experiential method of communication that transcends all other methods. Don’t be one of those people, I beg you. I truly wish that all of you would be able to find that pen or pencil that can take you from a person with immense amounts of creative potential to a person that willingly spreads that creative potential onto thousands of pages of paper. Unlock the writer waiting inside you, we all have one. It doesn’t have to be a bestseller to be worth a damn; your writer could help change the life of one random person that reads a message you wrote and left with the check at a restaurant. You never know just what you can do until you begin. I say all great beginnings start with a fantastic pen and a blank piece of paper.

Posted by KarasKustoms at 4:30 PM