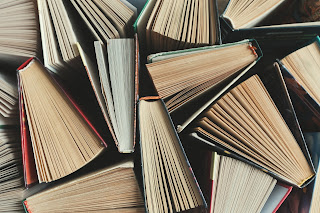 If you’re thinking this is going to get all scientific with a reading list and footnotes, that’s likely not going to happen. I’ve read articles on this in the past, but this post is going to mostly draw from my own experiences rather than pulling primarily from online articles. I’m sure there will be a crossover, but I’ll base my insights on experience and opinion. Let’s dive in.

One of the biggest benefits of reading is an ever-expanding vocabulary. I was homeschooled for several years in the late ’80s and early ’90s before I went into high school, and part of my homeschooling entailed trips to the public library. My mom would take my brother and me to the library two or three times a week. We’d do our “classes” there and between lessons climb through the shelves reading books on all kinds of topics. When I turned 16, I applied for and got a job at the library and would work there for six years. I’d always been a reader, but spending that amount of time at the library flipped a switch for me. I became a voracious reader. I’d stay up until 3 am reading, then get up at 7 am, do my school work, work from 4 pm until 9 pm, eat a late dinner, and then read again until 3 am.

This all led to a rather large vocabulary that I always knew I had but started to benefit me when I went to college. I had professors comment on it, both in positive and negative ways. A few times I had a professor specifically call out sections of a paper I wrote as an example to the class. Though I was happy to be getting good grades, I wasn’t so happy about the rest of the class thinking I was some kind of teacher’s pet. This didn’t just impact my writing though, it also helped me in my speaking. One of my classes had weekly mini-presentations, and the professor of that class did historic reenactments. He had a rather large vocabulary and after my second or third presentation, he kept me after class and talked to me about my presentations. It was interesting to hear him say that he was also a book lover, and he attributed much of his success in life to being such an avid reader.

Reading is an exercise for your grey matter. In the beginning, you’re paying attention to each word and using them to mentally form the images in your mind of what you’re reading. You’re building each story and experience. You’re probably not paying attention to things like subplots, literary themes and tropes, specific contextual elements, character nuance, etc. when you begin to exercise your brain in earnest. As you become more comfortable reading your brain will become better and better at multi-tasking. Suddenly you’re not consciously crafting the building blocks of the story. They’re happening “behind the scenes”; instead, you’re now picking up on other aspects of the piece you’re reading. Structure, dialogue, context, and theme pop up in your brain but also incongruities, grammar mistakes, unresolved plotlines, things used out of context. This “next level” of reading is massively helpful for anyone that wants to write because it mainly deals with everything that isn’t the “story” being told; instead, it is all about the blueprint, foundation, and frame with which the writer has crafted his or her tale.

When you start to write, you’re subconsciously using your analysis of other author’s works in little ways to improve your writing. It’s not plagiarism because you’re not recreating plot and character and dialogue, instead you’re avoiding mistakes you’ve read, ensuring the dialogue is unique and “real” for each character or using nuance and context similarly to good writers. The phrase “don’t reinvent the wheel” comes to mind for this. For the most part, writing isn’t creating some new method or style; it’s applying your ideas, experiences, stories, etc. to a method of communication that’s pretty time-tested. Reading helps you absorb the less obvious techniques of both the good and the bad writers.

One thing I learned a few years ago in terms of reading was how impactful reading different types of writing or genres or authors showed me a variety of different styles of writing. Like a lot of people, I have my preferences when it comes to reading. I PREFER to read fiction, and specifically the genres of fantasy, thriller, mystery, and science fiction with a smattering of historic fiction and alternate history fiction. I am a fan of nonfiction biographies and histories but it really has to be on a topic or figure I’m SUPER interested in. A few years back I took a class in college on American short stories; a genre I disliked immensely until that class. Going through that class and analyzing the writing, writers, and techniques was massively impactful on me as a reader and a writer.

Getting deep into short stories gave me a real appreciation for the difficulty involved in crafting a compelling short story. There’s not a lot of wiggle room when you’re constrained in the number of letters, words, and pages you can use. Shirley Jackson’s “The Lottery” has only 3,378 words and is considered one of the greatest short stories ever written. In contrast, “To Kill a Mockingbird” by Harper Lee, an American classic, is 100,388 words long. Granted these are two very different works, both are considered masterpieces of American writing, and as primarily a reader of novels I figured “To Kill a Mockingbird” would resonate with me more. I was immensely incorrect. This happened time and again when I read a new short story, I was amazed at the breadth of the story being told so deftly in so few words. So, reading this new style of fiction pushed me as a writer to attempt to write in the short story style, but it also gave me tools on how good writers can cut parts out of stories to keep the word count down without sacrificing content, emotion, or story itself.

Finally, reading causes thinking which is crucial for good writing. As a writer, when you read something your brain is sifting through the writing and analyzing it. For me, this is mostly subconscious until something big pops out at me; which is usually something really interesting and new or a mistake. Then as I read more, I’m consciously looking for more of the same from this author. I’m looking for more simple grammar errors, or I’m looking for more correct uses of relatively unknown military jargon, or whatever the case may be but I’m critically analyzing the writing now. It’s another way for me to connect with the writing, and ultimately a skill that helps me hone my own abilities as a writer.

This is something I do with my favorite writers more than I do with new writers. The higher the esteem I have a particular writer, the deeper I delve into their writing. Surprisingly enough this has led to some big letdowns when a writer I really like cranks out something particularly subpar. There are lots of reasons writers, especially those published by major houses, could release an inferior piece of writing; deadlines, contract fulfillment, lack of editing because they’re “an established writer”, etc. are all examples. It’s still a bit of a shocker when I read a new book from someone I consider a superior writer only to realize halfway through they’ve written something far below their talent level. But it is something that I notice quite often now.

Hopefully, this provides some food for thought on your writing journey, and maybe this week instead of writing every day maybe pick up a book and engage in some reading instead. Until next time, read on.

Posted by KarasKustoms at 3:51 PM