Inventory is Done, What Now? 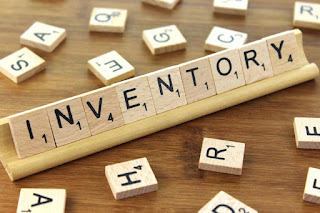 It's official, inventory is done. For the past three Fridays I’ve been coming in, counting one section of our warehouse, verifying numbers, then updating our inventory software. It’s usually a process that takes a few days, but in the past, we’ve done it during a week when we were still actively shipping out product. This year, I chose to do all of the counting and updating on Fridays when we weren’t open. It was beneficial because I had the run of the shop and could really buckle down and get deep into the shelves, but it took far longer than I expected. That being said, I’m glad to be finished and now I can actively focus on the rest of my LONG list of things I need to accomplish before we get much further into the year. So, what’s on my list of things to get done? I’m so glad you asked.

The first three months of the year have the framework of a plan in terms of releases and production timelines. The next few weeks will revolve around me finalizing a lot of this framework and getting a more detailed plan in place. I’ll start pulling raw pens and prepping them to be sent out to anodize for the next two months of special release products. While I’m doing that, I’ll also be pulling pens for our production lines in colors that are currently out of stock or low stock. Some anodize items left last week, but the majority of it will be sent out in the next 10 days.

While this is going on, we’ll sit down for a yearly meeting looking at the pricing matrix, wholesale request list, and wholesale pricing sheet. Since we’ve moved to a new website and updated pricing when that was conducted in May 2020, we don’t expect many changes in our pricing. That being said, products that we source from other vendors (nibs, clickers, refills, etc) may see an increase since most of those vendors have also conducted their yearly price increase as well. We are looking forward to expanding our wholesale partnerships to some small brick and mortar shops around the United States. Any time someone that owns a physical store wants to dedicate some real estate to our products, we’re excited to start a relationship. We have several on the list right now that look like stellar opportunities to us.

I’ll spend much of the next week diving deep into the well of creativity for a variety of reasons. I’ve got two upcoming Vertex Special Releases to name and get lid logos drawn up. We’re getting closer to the February release of the Karas Kreepers items and while I’ve done the preliminary research, putting it all together will take a bit of time. I’m hoping to plan out the next four weeks of the Monday Morning Blog, and keep up with this planning schedule, it just helps me avoid writer’s block. With that, I also need to flesh out some of the newsletter features a little better. While I have an idea of where I want to go with many of them, I frequently don’t have much more than a simple outline drawn up for the feature. Having a list of plug-and-play topics to cover would be massively helpful in terms of my brain, the goal is to get a list of topics that I can just pull from instead of sitting in front of a computer screen hoping to have a “eureka moment”. Cross your fingers this actually happens; it will make for much better content and a saner writer as well.

Lastly, I’ll be reaching out to some vendors we work with to get orders put in for a variety of things. Reordering bottled fountain pen ink is high on the list. Followed by contacting Vince at Turner’s Workshop to get another order of resin rods put in. I’m looking at adding a different refill to our rollerball pen options, and I’ll be testing different refills in the coming weeks. Gee and I will do a brainstorming session to come up with some new sticker ideas. And I’ll start putting pen to paper on a new small series release that I’m planning for summer 2021. It’s going to be a whirlwind these next couple of weeks, hopefully, I’ve got the stamina to get it done!

Posted by KarasKustoms at 2:40 PM