In preparation for the upcoming production release of our first mechanical pencil, I thought it would be a good idea to share our experiences, good and bad when it came to adapting a pen into a pencil. Like the title says, not everything’s going to work out the first time you try it. The journey with the Retraktable is one such example. Initially, this blog post was going to be “3 Things That Went Right, 1 That Didn’t”, but then I realized there might be a lot more that didn’t go “right” than just one thing. In any case, let it be known that a lot more can go wrong when you attempt to take a product from “idea” to an actual physical specimen.

The best place to start is probably all the way back at the beginning. It’s hard to say when the first request for a pencil was sent to us, probably shortly after the Bolt Kickstarter. Needless to say, a pencil has been in the Top 5 Most Requested list for a LONG time. Our biggest concern was making sure we had a product that met our standards but also fulfilled a lot of the peculiarities of the pencil crowd. It’s also a bit daunting when the bar has been set in terms of a metal mechanical pencil, and Rotring has been doing that for decades. Suffice to say, we sat down to prototype something that resembled a pencil in early 2018, and it’s taken us nearly three years to see those prototypes be realized into a working pencil that meets our standards.

Our initial planning stages really looked internally at our current retractable products for inspiration because we knew there’d be a contingent of people who would seek out pen and pencil sets or at least something resembling that type of product. We didn’t want to design a pencil, just to turn around and need to design a pen based on that pencil a year down the road. We also didn’t have the capacity to tackle a pen and pencil design at the same time. Adapting a current product into a pencil using an “off-the-shelf” pencil mechanism quickly became the driving thought process at this stage.

The Bolt was eliminated pretty early on for a few reasons, but mainly due to its actuation method. Potential customers either love it or hate it, there really isn’t any middle ground. We didn’t think it would be as popular as a traditional-style mechanical pencil. Based on the available pencil mechanisms we could easily source in bulk quantities; we were left with the EDK and Retrakt. Ultimately the EDK was removed from consideration due to its size because it would require some pretty major modification to get that pen to work with the pencil mechanisms we had identified. That left the Retrakt as the only candidate for adaptation.

Once we had decided on the Retrakt as the pen we’d be adapting, we began to look at the specifics of how that adaptation would go. Ideally, we wanted to make as few changes to the pen as possible, but we needed a functional pencil as the outcome. The standard Schmidt SKM 88 click mechanism would need to be adapted by removing the miniature ball bearing that locks the mechanism into place. We’d also need to machine an internal locating collar out of Delrin because the fit of the mechanism we intended on using wasn’t as precise as we wanted.

Our first iteration of a physical prototype was an interesting mess of parts that we had cobbled together, and we got a somewhat working pencil out of it. The first problem soon reared its head, while we had identified the minimum number of parts needed to adapt the Retrakt to a pencil, we couldn’t productionize those parts. The pencil mechanisms from Schmidt have massive allowable tolerances in terms of length of throw which completely eliminates our ability to use precision-built adaptation kits. We put our “working” prototype kit into ten different Retrakts and only two would work immediately with another three functioning if we fiddled around enough but the other five would never function. It was a massive headache. So, we went back to square one and began dissecting each part to see what we would need to manufacture or source to get a functioning adaptation kit. Here’s the list of adaptations we ended up with by the time we finished the first prototype run. 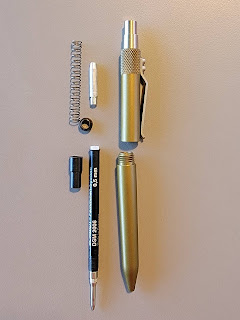 Used in conjunction, these adaptations would allow the Schmidt DSM 2006 pencil mechanism to work MOST of the time with a MAJORITY of existing Retrakt pen bodies. We adapted around 300 pens into pencils and sold a prototype batch that we’d tested to ensure proper function, then we sat down to discuss the project.

Before we move on to the next phase of our process, I’ll address the Eraser Issue, as it came to be known. There was a long internal debate over the inclusion of a built-in eraser. We went round and round on this topic in every meeting we had during the initial prototype phase. Ultimately, there were two reasons we settled on not using a built-in eraser. The first reason was the lack of availability of a high-quality eraser we could source in bulk quantities. The second reason was external feedback we received from pencil users who said they’d much prefer we eliminate the built-in eraser especially if we supplied a high-quality eraser like a hi-polymer eraser. You’d think this would have taken a few weeks to come to this decision, if memory serves this decision didn’t get made until early November 2018, months after we started the prototyping process.

The first batch of 300 Retraktable mechanical pencils sold over the 2018 holidays as quickly as we could list them on the website. We were apprehensive about the customer feedback, and worried customers would end up having issues with function if they tried to make tweaks to the operation of the pencil. We had far fewer customers lodge complaints than we expected, but it was still enough complaints about the future of the Retraktable to be one of the main topics in our 2019 planning meeting. We decided to put the entire project on pause, largely due to the amount of work each adaptation kit required combined with the fact that the kits weren’t always successful which led to a sub-par product. But we knew it wouldn’t be long before we revived the product and decided to move forward with it.

In our 2020 planning meeting, the Retraktable was moved from the back burner to a new prototype phase. We threw out everything we’d done in the past, including the Schmidt DSM 2006 mechanism. Throughout this latest prototype phase, we chose to look at things a little differently. We still wanted to adapt the Retrakt because we’d received so much positive feedback on that pen being the basis for the design. However, we knew we’d need to make some major changes that wouldn’t be a true adaptation rather the Retraktable would be a mechanical pencil that looked like the Retrakt and ultimately only share one main component: the upper barrel. 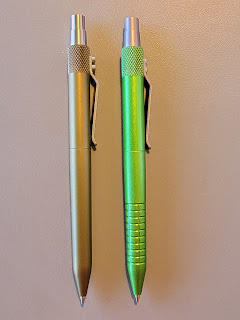 What did we end up doing when we pushed into the final stages of prototyping the new Retraktable? We did a lot.

First, we decided to use the mostly metal Schmidt DSM 2007 in lieu of the mostly plastic DSM 2006. The DSM 2007 has a threaded body that would hold the mechanism in place removing the need for a locating collar or tensioner spring. But in using these threads, we’d need to machine a lower barrel that was threaded for the mechanism and couldn’t be used as a pen. But we could still use the upper barrel along with our standard clip and screws.

Second, we decided that it would make more sense for us to make our own click mechanism based on the Schmidt SKM 88. It would be nearly identical, but we could make it out of aluminum and therefore anodize every piece of it. We’d machine both the button and housing in-house, use a small spring between the button and housing, and keep everything in place with a C-clip capture system. This allowed free movement of the mechanism and gives it the “feel” of a standard mechanical pencil “button”.

Lastly, we decided to source stamped 6061 aluminum clips for the pencils. This was a bit of an afterthought, but because we were adding a mechanism that could be anodized, we figured it would be apropos if we had a clip that could be anodized giving us the option of doing a single color Retraktable. The sample clips came back with a lovely spring to them, and we knew they’d be perfect for the pencil. 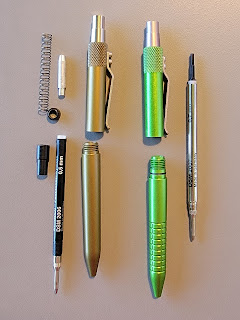 I’ve learned that it doesn’t always work the first time, but I’ve also learned that we’re pretty resilient and if the idea and design have merit, we’ll pursue it. We’re doing that right now on multiple projects and potential additions to current pens. The first few go-rounds might not be successes, but we’re not going to stop trying new things. We’re stubborn like that.

Posted by KarasKustoms at 2:25 PM