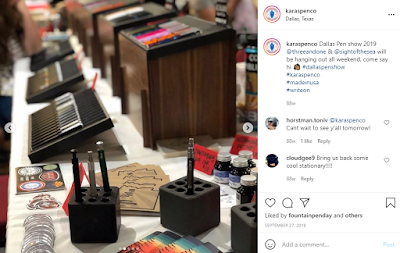 Things are starting to open back up, and around the United States many of the pen show organizers are sending out notices that they’re planning on hosting shows this year. Maybe you’ve thought about attending one in the past, and you’ve made the decision that this might be a good year to do so. Travel is still a bit cheap, you’ve got some extra money, you’re able to easily work remotely, and you need a break from the same four walls. While Karas Pen Co won’t be attending shows this year, we’ve got some tips and tricks we’d like to pass along to aid your pen-venture.

First off, make a budget because if you don’t you may end up spending WAY more than you’d planned on. Pen shows are one of those places where there’s bound to be something that catches your eye on EVERY SINGLE TABLE. There will be a lot of the same thing on multiple tables, but there are also a lot of unique items especially if you’re considering vintage fountain pens. In line with this budget thing, unless you’re looking for something VERY specific, don’t buy the first time you see something. Most vendors get set up early, peruse the other tables, then kind of price stuff close to each other. But there are numerous stories of someone buying a pen the first time they saw it, only to find a similar or better example of the pen for considerably cheaper at another table.

To go along with this, pen shows are meant for bargaining. This isn’t a true blanket statement. Some sellers simply won’t shift from their prices. Most of those are the larger stores, manufacturers, and some hardnosed sellers. But many, if not most, of the other tables will be set up by someone who understands there is going to be a lot of “wheeling and dealing” going on. So don’t be afraid to try to talk the price down a bit, it works in a LOT of cases.

One piece of advice you’ll hear tossed around is the “ask before you touch” statement. This is good advice for the most part, but I think it is becoming less of something vendors are really vehement about. There are some hardline vendors that will get bent out of shape if you touch their wares, but a lot of vendors are really trying hard to sell things. They understand people are there to touch the pens. Be respectful and careful with their product, and if you feel like asking first that’s nice but I don’t think it’s as big of a deal as it used to be.

Spend as much time in the hotel common areas with the pen nerds as possible. There are often classes and meet ups at scheduled times during the shows, but after the show closes there are also planned and spontaneous gatherings. Pen nerds are an amazingly kind group of people for the most part. They’re all in one place to geek out about pens, paper, and ink. They’re pretty much a jolly bunch and tend to take over the bar, restaurant, and patio area for long sessions of eating, drinking, talking, and sharing pens with other people. This is your chance to write with almost any pen imaginable. You’ll likely see every pen you’ve ever considered as a “grail” pen, and you’ll be gladly given the opportunity to write with them. That’s how much pen nerds want to show off their stuff. If you’re staying for the entire show, this evening gathering will likely evolve into a dinner somewhere, drinks and cigars, and all kinds of other cool stuff. It’s just a really fun time.

But if you’ve travelled far to a show, then also consider taking some time to see the sights. There isn’t anything wrong with taking a detour to spend a little time doing non-pen related things. There are always other opportunities in almost every city that hosts a pen show. Taking a break to head to a museum, see a baseball game, or walk through some of the tourist attractions, makes the entire trip that much more memorable.

Hopefully, this list is helpful. We can’t wait to spend some time with those of you that do attend shows in the future. We’ve paused shows for the time being, but we do intend to go to several as soon as we wrap up some major production, prototyping, and new designs. Due to our shift in plans to manufacturing and our need to plan that out through 2021, we didn’t think we could pull off a good show presence this year, but we’ll be back soon enough.

Posted by KarasKustoms at 11:19 AM