Pens in the News 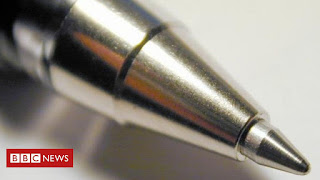 Writing the title of this blog is enough to make me chuckle to myself. Not for any anti-journalism reasons, but because it’s somewhat laughable that anyone would potentially find pens in the news in 2021 unless of course they were being used to commit a crime. It’s surreal that in an era where we carry around thousand-dollar supercomputer/camera/telephone/secretary objects in our pockets there is this astronomic rise in popularity of an analog tool. Don’t get me wrong, I understand that desire for simplicity, the need to unplug, how the physical act of writing is different than typing, and all of that; but it’s still weird that I can do a Google search for “fountain pen”, click on the news section of results, and there are five or six recent articles on the topic from pretty reputable sources. To be fair, this isn’t something I look up frequently, but here are some of the results I got back recently when I was searching for a specific Forbes article from a few years back.

The BBC is a pretty legit source for news. Yes, I know they publish articles on a variety of different topics, but they’re known as a news source. While this article isn’t as recent as many of the rest, it’s an article I wanted to highlight because it covers the history and importance of the ballpoint pen. There have been similar articles posted in the past, and hopefully there will be more in the future; but the importance of the ballpoint pen is something I’ll always try to highlight. I’m always amazed at the bad rap ballpoints get from all sides in the writing community; so, there is something of “defending the underdog” when I get to link to an article talking about the greatness of the simple tool that is the ballpoint pen.

New York is a biweekly periodical that isn’t a traditional “news” source but definitely a big name in the world of magazines. A recent article touts the ability of a fountain pen to transform the authors’ terrible handwriting into lovely script. This is another popular topic, though normally it’s phrased as a question asking if a fountain pen can improve handwriting. I bought into this assumption myself, and I’m sure a fountain pen could improve my handwriting but that would center more around practicing with said fountain pen rather than simply using one all the time. The fountain pen is doing much less of the heavy lifting whereas the time spent practicing good penmanship is the real hero of this story.

There’s an article about a popular manga series, Chainsaw Man, getting its own line of fountain pens. This is less surprising to me due to the popularity of fountain pens amongst my manga loving friends, but still a pretty interesting occurrence considering the growing popularity of manga and anime in the United States among Millennials and Gen Z.

Did you read the one about the chemistry professor who uses modern and vintage fountain pens for both chemistry and art? Yeah, not only do we have the collision of chemistry and art, we have it via the medium of the fountain pen. Sure, there’s nothing new about science and art being wonderfully entwined, but it’s far less commonplace. Then you pile in the use of analog technology in two fields that are moving in the opposite direction, and you have an amazing oddity to say the least.

There are dozens of other articles about pens and writing instruments that come up in a Google search, and hundreds if I allow for articles published last year. I frequently overlook the popularity of the written word and writing utensils because I’m constantly surrounded by them. But when I look for the evidence of writing tool popularity, it’s becoming harder and harder to ignore how important pens, pencils, and paper are even in the 21st century. That’s comforting to someone like me, someone with and old soul and a love for analog writing.

Posted by KarasKustoms at 3:01 PM