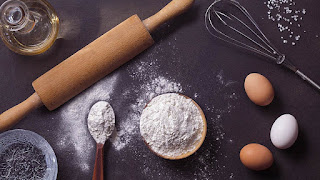 I still have a pretty big list of ideas that I'm working through, so hopefully these portions of our newsletter are helpful. I'll jump right in with something that's actually in the news right now: baking. It seems there's been a huge uptick in searches for "bread", "baking", and other similar search terms. I've pulled out some research on how baking is a stress reducer, and also an article on baking projects for April, and easy recipes from your pantry. Hopefully stuff like this can spur on some ideas and fill those bellies.

Start a daily photo scrapbook or Instagram account. I know it seems boring, but you'd be surprised at the hilarity that can ensue. The idea is that you take pictures throughout the day, choose the one that speaks to you most, print it and put it in your scrapbook or put it up on your new Instagram account. I know that if I were to do this I'd have a wealth of hilarious randomness and cuteness; a lot of it featuring my 17 year old daughter or our three dogs. But it's a good way to focus on the positive moments and lighthearted times that happen every day but we often miss or take for granted.

I'm back with my three picks of the day, and while most of the world is talking about Tiger King, that one isn't making my list. Without further ado, here we go.

A big of levity starts things off with Hulu's Community, a sitcom that revolves around a group of misfits thrown together in a study group at a fake community college. Idiocy and hilarity ensues, the cast and writing is great, the show was created by the Russo Brothers (yes the guys that made some of the BEST Marvel movies), and it's just a really fun watch.

I've already talked about my love of books, something I normally hate is when books are ruined by making them into movies or television shows. That's not the case with Amazon's Bosch, the gritty conversion of Michael Connelly's well known detective into a streaming series. Titus Welliver is at his best in this series, the writing is great and often does an amazing job of translating the source material. With 5 Seasons already on Amazon, a 6th starting in April 2020, and the 7th and final being shot soon; now is the time to start watching this incredible show.

Some of the best drama/mystery series are being created in Europe, many of those are being rebooted into US versions that do a poor job of recreating the dark gloom and stark landscapes of the originals. Thankfully Netflix's Hinterland has not been picked up for US recreation. But the original is a work of art. Set in Wales this detective drama is permeated with a sadness that is almost palpable. The actors are some of the best I've seen in the genre. I'm eagerly awaiting more episodes and in the interim have watched the show all the way through over five times. Yes, it really is that good.


Posted by KarasKustoms at 1:59 PM