How Do I Choose What to Write With? 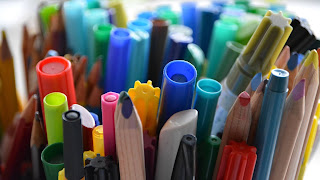 An aside, for this article I’ll be breaking down answers to four categories: pencils, ballpoint pens/refills, rollerball pens/refills, and fountain pens. With our pens, there is a lot of crossover due to our modularity, but the assumption is that the customer is coming from a place of little or no knowledge in writing instrument specifics and not much knowledge of our brand and the ability to move between ballpoint, rollerball, and even fountain pen in one pen body.

Honestly, I don’t often recommend a pencil, and that’s not because we only recently added one to our list of writing instruments; but more so because there aren’t a ton of applications that call for a pencil. I do enjoy the difference in the writing experience a pencil provides. Combined with the ability to make corrections easily, and the fact it can write on the cheapest or most expensive paper; pencils make a lot of sense. But they’re not permanent, and outside of using them specifically for sketching or in an environment where ink might prove problematic, there isn’t a lot of use for them outside of personal preference. And therein lies the last reason I don’t often recommend them, people that REALLY love pencils are quite picky about aesthetics, lead size, weight distribution, diameter, body material, length, etc. Taking all of those into account there are more variables to pencil preference than there are in the uber-particular fountain pen crowd. So, I tend to only recommend a pencil when the customer specifically mentions a predilection to using pencils over pens, and even then, if they’re open to it, I’ll suggest a pen that “feels” like a pencil.

That leads me to the second least recommended type of writing instrument, the ballpoint. I don’t often recommend ballpoint pens or refills to new pen enthusiasts for one specific reason, they likely have been writing with some type of gel rollerball pen and until recently gel ballpoint refills were not widely available. Because of that, the writing experience is going to be noticeably different, and what some would consider a poor writing experience. That’s not to say I am anti-ballpoint, in fact, I’m the total opposite; I think a ballpoint pen ticks most of the boxes when it comes to a writing instrument performing in almost all environments. Ballpoint pens take a lot of crap, despite the fact that they were likely one of the biggest technological advances in modern writing instrument history. They were revolutionary in a variety of ways from ink chemistry to non-smudge properties to component manufacture; there is a reason many people consider the ballpoint pen a truly groundbreaking product. In general, I like them because they can write on almost any paper, the ink won’t wick away in my pocket should the refill actuate, and they’re a little more forgiving if you’re writing in extreme weather conditions. All that being said, writing with a ballpoint pen for long periods of time can make you hate writing. They can catch on fibrous paper, the ball can stop working as fibers get caught in them, the ink can skip due to the ball not being as precise, and the ink itself is oil-based and thick which can feel weird depending on the paper being used. Taking everything into account, I generally only recommend them for people that do a lot of pocket carry or tend to write in inclement weather.

I’m going to make some of you angry with this answer, but it’s just me being brutally honest. I rarely recommend a fountain pen to people that ask this question. In reality, I might actually recommend a ballpoint more than I recommend a fountain pen, but recently fountain pens have been gaining some market share and many new pen people specifically ask about them. While I love how a fountain pen writes and how personal it can feel; I still don’t think they’re an option for a majority of people. If I were to continue in my honesty, I’d describe fountain pens as somewhat impractical when it comes to 90% of the writing that takes place on a daily basis. Yes, you could argue that writing by hand in a world of cell phones, tablets, and computers is impractical, but there are so many factors to consider when it comes to ensuring a fountain pen will function properly that using one for every writing transaction is going to be difficult. People that shift the lion’s share of their writing to a fountain pen do so with a laundry list of what I call add-ons. Need to ensure the ink won’t disappear if water gets on it? An additional bottle of waterproof ink is a necessity. Want to make sure your signature is legible on all of those documents? Higher quality printer paper will be a must. The same goes for sticky notes, legal pads, journals, note cards, greeting cards, and the list goes on and on. That doesn’t even take into account certain times you won’t be able to use your fountain pen at all. When I do recommend a fountain pen it’s always with the caveat “but carry a ballpoint or rollerball as well, cause you’re going to run into a situation where a fountain pen just won’t work”. That’s the reality of being a fountain pen person, if you don’t want to use someone else’s disposable pen you’re likely going to need to carry more than one type of pen all of the time. Fountain pens, as lovely as they are and as much as I really enjoy using them, have their place which is not always as an EDC item.

This leads me to the most recommended option by far, probably 80-85% of the time; the rollerball pen. The reasons for choosing a rollerball as the first step into pen nerd-ery are so numerous I might not be able to cover them all. It’s far easier to point out what I consider to be the two flaws rollerball pens carry with them: wicking ink that can ruin a pair of jeans or a nice shirt and no viable pressurized refill options. But those are negligible complaints about an option that has so much upside. Have a preference for a specific color of ink? There are tons of options available specifically from Pilot in the G2 or Juice refills. Want the option to switch from a fat 1.0mm refill to an ultra-thin 0.38? You can easily do that with a variety of different manufacturers' rollerball pens. Did your pen just run out of ink and you didn’t bring an extra refill? No worries, the convenience store likely sells a plastic rollerball with a refill you can rob and put in your pen. Those are just a few of the reasons I recommend rollerball pens over the other options, but the biggest one is this: if you’re used to writing with a modern rollerball pen from Uni or Pilot or Pentel, our rollerball pens are going to “feel” very similar in size and shape to those manufacturers’ retractable rollerball pens. So, there is an immediate “comfort zone” you can fall into if you choose one of our rollerball pens, and that’s the biggest reason I recommend rollerball pens over all the other options.

Yes, I still love my fountain pens and carry several with me almost all the time. Sure, I’ve added a pencil to that carrying case along with a nice eraser just in case I want to write in pencil. Personally, I’m going to pull out a ballpoint more often than not when I go to write something especially if it’s signing a receipt or taking a quick note. And I’ll almost always have a rollerball with a Pilot Precise V7 RT refill in it because that’s my favorite setup. But I’ve been a pen nerd for over a decade now, and I can’t remember the first time I asked myself this question. I think most people that try a good pen will work their way through several pen options before they find “The One” or the best option. There’s definitely a journey for those of us that really get bit by the writing bug and no matter where you start you’re likely to take a lot of off-ramps before you get to your destination on finding the best pen option or options for you. This is just my process on how I answer that question, don’t get too pissed at me it’s all just my opinion and I am well aware you could have a completely different set of answers. But that’s what makes writing and the pen community fun, we don’t always agree but we have a TON in common. Regardless of what you choose to write with, just keep writing.

Posted by KarasKustoms at 5:44 PM